Not Everything Here is Fanfic

Original work is uncommon on the internet. Primarily because of potential copyright issues.

Of course that assumes that someone might want to pay money for it. Not really a safe asumption to make.

As visitors to this site should aready know, Charlotte Glover does not exist. I am the copyright holder of these works. I doubt that there will be more of them here any time soon. 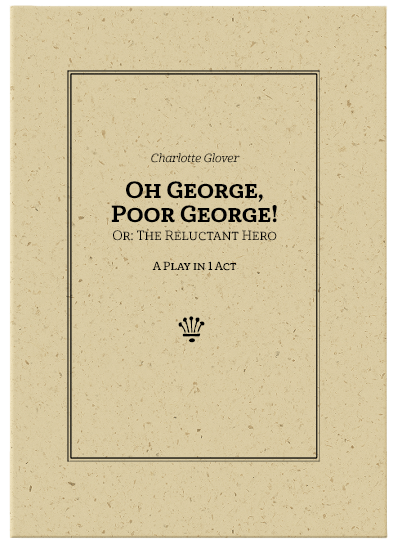 There is no hi-res version of this file. Full resolution files are for when you really want the graphics to look their best. The graphics in this file are just minor decorations, and their quality does not matter. PDF, even at screen resoution does a decent job with text.

This project really belongs in with the student work (except that it isn’t a graphic). It was originally written for a class assignment in a playwriting class during my undergraduate days at Cal State Los Angeles. I cannot recall what grade I got for it, but I did at least complete it, so I expect that counted for something. It was rewritten a couple of years later and packed off with high hopes to a publisher (Samuel French, iirc). They did not want it. I suppose I cannot really blame them.

Even then, it was not truly original. The underlying bones of the story were presented, pretty much as is, in a half-hour (or thereabouts) skit presented locally at a classmate’s church (along with other skits) at some point in my senior year of High School. i.e., 1963–’64. I do not know who wrote that version of the plot, which was, in fact, a musical.

It’s my own suspicion that the popularity of the Broadway show: ‘Once Upon a Mattress’, starring Carol Burnett, was the inspiration of the assemblage of something so closely resembling a fairy tale into a mini-musical. One should also recall that a somewhat stripped-down version of the Broadway show was broadcast on national television around that time, and highly applauded.

However, this is not really based on a fairy tale, and even the folk tale of St George and the Dragon upon which it is loosly based seems only to have provided the roughest of springboards. Instead what it consisted of then, and still consists of, is a fine compendium of stock characters, T.V. commercial tag lines, a mocking of genre tropes, and general silliness — not that I suppose that there is anything wrong with any of that.

In any case, it seemed worth the effort to digitize it and keep it around for laughs. (As has been stated in description of a far more well-known work than this; “it is harrowing only in its predictability.”) I’ll admit that it’s been given a fair bit more development since I started transcribing it, a couple of the scenes have been reworked, including a fairly radical adjustment of the ending, which in its original form was just too hokey to preserve. But it’s all still a very silly story of a lot of very silly people. Have fun!